“My mum was a single mother and she was very strict. She never let me go out and dictated everything I did. Even the clothes I wore. I was never allowed to go to youth clubs or parties. I was an only child but I was never allowed a social life. I did everything she told me. I left home when I was twenty completely unprepared for the adult world. I didn’t really know what was acceptable and what wasn’t for younger people.

I went off the rails a bit after that. I went out a lot and got into a relationship. My mum was still so controlling that she called the police and told them I’d been kidnapped by him. I had to convince them it wasn’t true. After that I began to train as a nursery nurse but while I was getting my qualification I fell pregnant and had to drop out. I lost the baby soon after but I didn’t feel I could talk to my mum about it for another two years. I just couldn’t bear the disappointment it would have caused in her.

When I was twenty-seven I met someone who changed my life. He was twelve years older than me but I never felt any age gap. I felt free with him for the first time ever. We were best friends. I didn’t feel like I had to be something else anymore. I was working in childcare again which I absolutely loved. We had a great social life. We even started travelling together. I was the happiest I’ve ever been. He gave me the nurturing and encouragement I’d never had before. I finally felt accepted for who I was. We were together for five amazing years but he got killed in a road accident while riding his bike.

Over 20 years later I’ve not met anyone who comes close. In fact the reason I became at risk of being homeless in the first place was after escaping a different relationship much later that turned into eight years of emotional and physical abuse.

I had to go back and stay with my mum after that but she was just as controlling as ever. Everytime I’m with her I feel like a child all over again. She still expects me to listen to her like I’m still sixteen. It makes all the doubts I had about myself when I was young come back. I stop feeling real. We’re such conflicting personalities it’s impossible to be around her. When I tried to talk to her about it she'd just say, “Two queens can’t be in the same hive”, and if I didn’t like it I should leave.

I went to stay at my dad’s for a while after that but he had to give up his flat because he couldn’t afford the mortgage. I moved onto my friend’s sofa but eventually they needed their own space back and asked me to leave. That was when I realised I had nowhere else to go and I ended up living on the street for four and a half weeks. If I’d had better information and assistance from the council at that point I don’t think I’d have had to do that, but when I asked them for help all they said they could do was put me on the housing waiting list. That was it.

I tried to find help and advice elsewhere but I didn’t know where to turn. I searched online for homeless hostels and backpacker hostels but they were all either full or I had to wait for three weeks just to get an initial interview.

At first I tried sleeping at Victoria bus station but it was too dangerous, so I ended up sleeping on night buses for two weeks. I was washing in Paddington station and travelling different routes every night. One evening I got on a bus that ended up at Heathrow. I sat down and pretended I was reading a book and after a couple of nights I realised no one was bothering me so I decided to stay.

Eventually the police moved me on but by then the airport staff had contacted a homeless outreach service and they helped me get into one of the hostels I was waiting for. If it wasn’t for them I don’t know where I’d be.

It’s not ideal living here (in the hostel), but at least it’s my little sanctuary. I’m learning art and have a new job in catering. I go to galleries and things I’ve never done before. I still see my mum. I do love her and she says she proud of me now, despite the mistakes I made. I know she was trying to do what she thought was best for me, but she’s so negative and has so many regrets. She still lives in her past and wants me to live there too. I don’t want to be like that. I don’t want to have regrets.

I try to support some of the other younger members in the hostel. I can see they have the same angst, frustration and misdirection that I had. It’s so hard when you want so many things but you have no means of getting them. I try to listen to them and give them some advice. I just remind them that they’re really lovely human beings which is something I wish I’d had happen to me when I was young. One of the most important things in life is being comfortable in your own skin, but you need other people to help you with that sometimes. Hopefully it might spare them some of the years of wilderness I went through.” 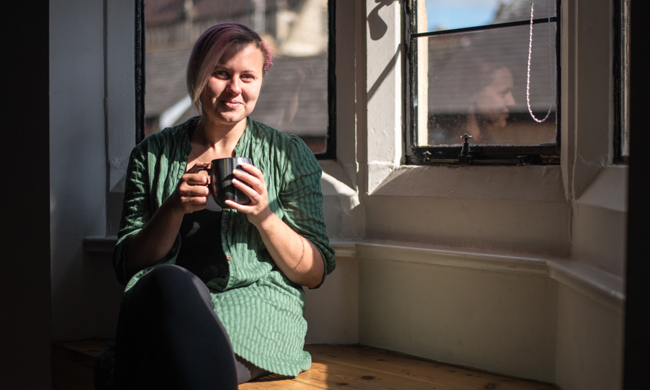 'I always thought homelessness was just rough sleeping. I’m lucky that I didn’t have to sleep on...