Jimmy's story. 'I had to hide under my blankets, so people wouldn’t see my tears.'

“I grew up in Scotland but came to England when I was seven. My dad was a lorry driver. He’s gone now. My mum lives in East Sussex near my sister. A small village. It’s beautiful down there. Last Friday was when I found out she had cancer. I hadn’t spoken with her in two years. I’ve got a little phone and I spoke with her again today. My sister picked up the call and said, mum’s asleep, so I said, tell her I’ll phone back later. Then she woke up, and she was grabbing the phone, saying, James, James! She was so happy. I had to hide under my blankets, so people wouldn’t see my tears.

I promised I’d see her soon. Every time I came out of jail she was always there with a hug for me. Always forgiving. I was fifteen years old when I got my first prison sentence. It started with robbing chocolate from shops when I was a kid. By the time I was twelve I’d worked out that I could start certain cars with my front door keys. I had my mum’s house searched for stolen goods when I was fourteen. Where I grew up there were lots of people around me doing that kind of thing, but I don’t know why I went down that road for so long.

I was first sent to a juvenile detention centre in Oxford. When we got there they made us run down this big long passageway carrying our mattresses. At the end was a sign saying, ‘Do not run’. Then they slapped us round the back of our heads. I was a scared little fifteen-year old boy. They called it a short sharp shock. They were bullies. I went to a borstal when I was sixteen until twenty-one. I was in some heavy situations there. There were riots. We would have running battles with the screws. We learnt how to make alcohol there too. We’d get a lump of yeast from the kitchen, put in a big bottle, then put a load of fruit in there; apples, pears, raisins, then two weeks later, you could get pissed. It’s like my pleasure and poison now. She’s a lovely mistress but a horrible master.

I’ve been in and out of jail a lot since then, and I’ve been sleeping rough off and on for fourteen years. I broke up with my girlfriend and I didn’t know what to do, so I got a shopping trolley and filled it up with blankets and came out here. I’ve done so many jobs over the years, but usually agency work, so you never knew what you would get. I’ve worked in meat factories. I’ve worked at Mercedez Benz. I worked in bakeries. I’ve done building sites. My favourite job was renting out deck chairs on the beach in Lowestoft in 2001, but things always went tits up, and then I would go back to the streets, or back in jail.

I last came out of prison two years ago. I had nowhere to go, but all I got was a forty-seven-pound discharge grant, and told to go to the job centre. I was sleeping rough at first, then I stayed with a girl for a little bit, but then we broke up because of my drinking, and I’ve been sleeping here permanently since June. Back in the day you’d get more help than you do now. They’d put you in a hostel until your licence ran out, which at least gave you time to find accommodation. Now probation don’t seem to care. It’s not their fault. They’ve lost all the power they had.

You get the best and the worst of people out here. Some people will nick your clothes, or your food, but there’s a bit of a community. I’ve got friends. We had a little party for me on my last birthday. I had six people sitting on my bed. We had some spiced rum and guitars. My mate's a busker. It was one of the best birthdays I ever had. They all came to see me. It can be funny too. I could write a book about the stories. I remember I was sleeping rough in London once and I woke up just as hundreds of naked cyclists road past in some kind of race. I thought I was hallucinating.

The police are alright with me. They always say hello. The security guards around here are lovely too. All the shopkeepers know my name. I talk to people nicely. I care about people, but I do feel embarrassed sometimes. This mum comes quite often. She’s got three kids. They’re only toddlers, all boys. She gives them a pound coin each, and they drop them in my hand one by one. I say, thank you, thank you, thank you. I always joke with her, have you got anymore kids? That makes her giggle.

I’ve got an interview at a hostel next week, but I really don’t know what would help me now. I could handle living in a house if it was my own place, but in a hostel, they can be worse than the street. They’re just propping up people’s misery. If I do go, then I just have to survive six months, and see if they offer me something. They said I might have to move to Birmingham, but I don’t want to live somewhere I don’t know anyone.

I’ve got a month to organise myself and then I’m going to go and visit mum. We were part of the Douglas clan in Scotland, so I’m going to turn up in a kilt. I know that will make her laugh. She always used to say, James, you’re the funny boy. I was always the comedian. That’s the only thing I’m scared of now. If I go back to jail I won’t be able to see my mum. I get volatile out here, always up and down, but I need to reign myself in. I’ve always been the black sheep of the family. Rebel without a clue. I don’t want to be that person. I just want to be happy. This girl gave me a sandwich the other day with a little note in it that said, love is the new revolution. I keep that above my bed.” 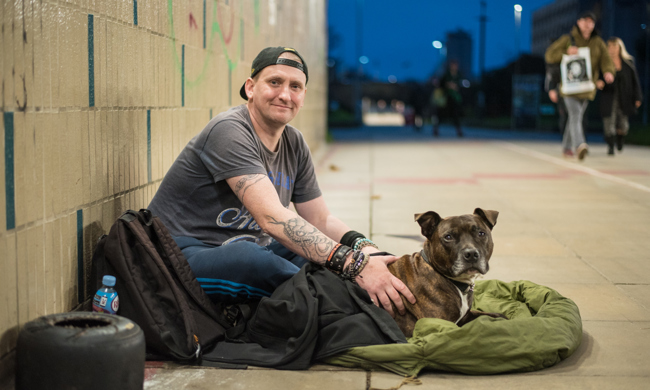 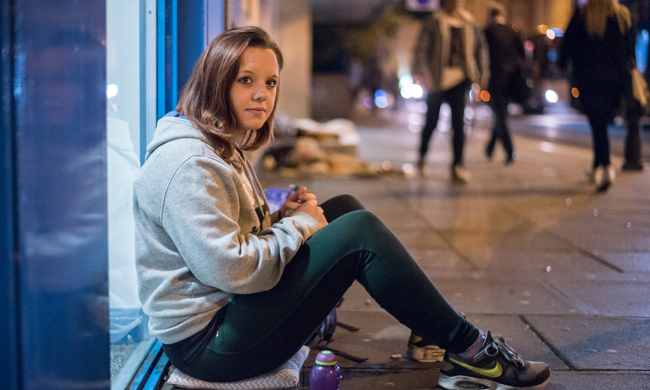