Scott's story. 'To play for your country – I'd never dreamed of that.'

“When I was a kid I lived with my parents in South London, and my nan lived in East London. When my parents split up, I drifted over here and lived with her. But then, about four and a half years ago, my nan died. She died in front of me. She was old, but she hadn't been ill enough to be in hospital or anything. After my nan died, I went to the council and explained that I'd been living with her, but she'd been renting her place and I wasn't on any of the paperwork. I couldn't prove my connection to the area, and so I became homeless. I couldn't believe I was being turned away. Councils shouldn't prioritise some people over others.

My mates let me stay with them at first, but after a while there was tension. I slept on the streets for three days - I slept in parks. I was lucky to get a number for an outreach team. They came to the council with me and arranged for me to get a place in a hostel or hotel. I stayed in a hotel for two months. Was it okay? It was better than being on the streets.

Then I was moved to a hostel – I was there for two years. At first, I just kept myself locked away. There were 150 guys in there and only a few of them weren't on hard drugs. It was hard to be around people in that state. I just knew I wanted to leave.

Earlier this year, I did an eight-week training course at Arsenal. On the leaflet for the course, it said, ‘You could be chosen to play for England.’ By the end of the course I'd forgotten all about that. I just enjoyed being there on the course. But then three days later I got a phone-call from a guy asking me, 'Do you have a passport'? And then he said: 'You're coming to Mexico for the Homeless World Cup'. I went crazy – I was like, Yeah!

To play for your country – I'd never dreamed of that. I want us to win, but even if we lose it will have been a once-in-a-lifetime experience. Football brings everyone together, whether they're playing it or watching it. Before I started doing football I was just sat inside, not doing anything. It got me out, kept me active, helped me meet people. It builds confidence as well. My confidence was bad for a long time. I'd like to start volunteering, to prepare me for working. I'd do anything to do with football or sports. That's what gets me up everyday. Recently I went to a Crisis awards ceremony for their members and got up on stage – I never thought I'd do something like that. It's all changed. Everyone here has been amazing. They've all helped me. It's mainly been about building my confidence. As well as the football, I've done some courses too, like the Build a Bike course – I still use that bike!

I've got ADHD - I think I've had it since I was eight, but back then I didn't know what it was. I just kept getting taken out of school. I was always in trouble. I've had periods where it was hard to take public transport, to go shopping. When I was homeless, I struggled to get things done – to deal with the applications, to go to the appointments. I needed someone to take it all in and explain it to me. I don't feel like I get much support with my ADHD. The only thing that they contact you about is to take money or give you money, but support isn't just about money.

I finally got a flat via the Clearing House scheme. They took me to see places and I just said yes to the first one! I just wanted to get out of there. It's good having a home again. I never used to think about people on the street - I would just walk past, the way everyone does. Now I talk to them.” 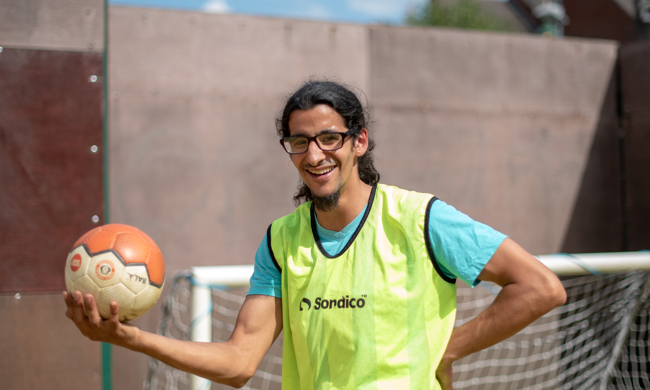 'When you go through homelessness, you lose your sense of community and family. It's hard to talk...

'Football was all I cared about from when I left nursery at four years old. They couldn’t distrac...