“Christmas can be a really hard time of the year. It’s freezing cold and some people think you’re here for the fun of it. When my nan was alive she had a lovely old Victorian house in London and we’d all have a nice dinner then sit together round the TV and the fireplace. She was like a mum to me but she died of bone cancer and we lost the house to pay for her care. After that I went down a slippery slope. My girlfriend left me, I lost my job and I ended up here. I used to get upset about it a lot but you get to a point where you just want to forget everything.

People do tend to be nicer at Christmas, but this past year I’ve noticed people’s attitudes have changed. There’s a lot more hostility and negative stories about homeless people, and they don’t realize the effect it has on people like me who genuinely need some support. Sometimes people will just make nasty comments as they walk past, like saying I’m not really homeless, or even telling other people who do give something not to. Some people will actually come up and pretend to give money then snatch it back at the last minute just to upset you. I’ve had my dog Alfie for seventeen years, he’s my only comfort, but some people have even accused me of renting him to get sympathy from the public. I never ask for money, people come up and give me things, but the council and the police still call us things like professional beggars. It’s not a job. It’s survival.

I’ve been trying to get I.D for ages now. If I can get that I can get a bank account and get an income. Then I can try and rent somewhere. I’ve applied to the DVLA three times. They’ve got my birth certificate and all my photos, but they said I need to provide them with an address with my name on the tenancy otherwise I’ve got no way of proving who I am. Until I get that I don’t know what to do.

I was working as a mechanic before all this happened. I’d like to get back into that, but I’d do anything that pays enough of a wage to pay rent. I know three other homeless lads who all managed to get jobs in the local area but they were living in a tent trying to save up enough money and the local security guards went to their employers and said they were known as homeless beggars and they all got sacked. I find that ruthless. I’m sure it’s illegal too. You try and get yourself out of a homeless situation and they put you straight back in it. People have offered me money to do illegal things but I don’t want to get involved in any of that. I’ve also known people who have been given work but then it turns out to be slave labour. They come up and offer you food, a job and somewhere to live but they basically keep you prisoner.

I used to sleep here, but I got attacked just before last Christmas and had four of my teeth knocked out, so now I go back to sleep in my tent. I was saving up money for a new pair of shoes at the time and I must have told the wrong person about it. I don’t know if the people who did it were other homeless people or if they were just on something, but I woke up and two people were kicking me in the head and emptying all my pockets. They stole all my money, my phone, anything valuable I had. The only thing they didn’t manage to get hold of was my silver chain my nan left me.

There are a lot of nice people out there though, but they get all these messages put in their heads not to help homeless people, or that it’s always our own fault for being here. They get told that being homeless is a lifestyle and that it’s homeless people’s choice so why should they bother helping them. Sometimes people will come to you on the street and get upset, especially at Christmas. They’d even start crying. I feel bad for them, but I don’t know what to say. I used to shed a tear when that would happen, but I just can’t bring myself to cry anymore.” 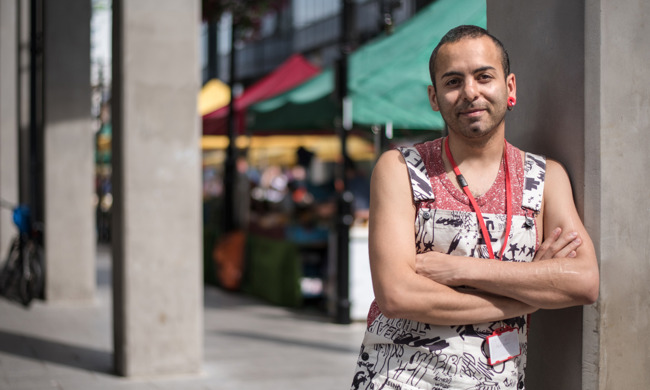 'Everybody in the group has such a different experience that it really challenged me. It’s change...