The majority of people (71%) think arresting people for sleeping rough is a waste of police time, with over half stating rough sleeping should not be considered a crime at all, a new survey reveals today.

The DeltaPoll study, which surveyed more than 3,000 people, was commissioned by national homelessness charity Crisis, as a Freedom of Information request reveals that forces across the country have made over 8,500 arrests under the Vagrancy Act (1824) in the last five years, suggesting a significant amount of police time, money and effort is being wasted because of this archaic law.

The antiquated Act, which makes rough sleeping and begging illegal in England and Wales, was originally brought in to make it easier for the police to clear the streets of destitute soldiers following the Napoleonic Wars. Now almost 200 years later it is still being used despite criticism that it needlessly criminalises vulnerable people and does nothing to tackle the root causes of homelessness.

This feeling is echoed by the public, with almost three-quarters (73%) stating that criminalising people through the Vagrancy Act does nothing to help end their homelessness, instead the overwhelming majority (76%) felt the best way to end rough sleeping was to support people into a home of their own.

The Government is currently conducting a review into the Vagrancy Act, but Crisis is calling for the act to be repealed immediately to prevent more people from being pushed further from the vital support they need to move away from the streets. The survey showed the public supports this approach, as 50% would like the government to make scrapping the act one of its priorities.

Responding to the findings Jon Sparkes, Crisis Chief Executive said: “It should be a source of national shame that people in our society continue to be criminalised for being homeless. This is not how we treat people, and it’s clear that the public would like to see it stopped for good.

“Of course, police and councils must be able to respond to the concerns of residents in cases of genuine anti-social activity but using a cruel and outdated law is not the answer, especially when all it does is further dehumanise people who desperately need support.

“What we need to do is treat people with dignity and respect. The Government is currently reviewing the Vagrancy Act as part of its rough sleeping strategy, but it must go further and scrap this antiquated law once and for all.”

1. Crisis commissioned DeltaPoll to conduct a survey of 3,455 adults (aged 18+) in England and Wales. Fieldwork was undertaken 5-13 December 2019, online. The figures have been weighted and are representative of all English and Welsh adults (aged 18+).

2. The below tables show the responses of England and Wales nations and England regional breakdowns to the following statements or questions.

a.  Arresting people who are rough sleeping is a waste of police time

b. Rough sleeping should be a criminal offence

c. Criminalising people through the Vagrancy Act will not end their homelessness

d. The best way to end rough sleeping to give people the support they need to move away from the streets and into a home

e. Do you think the government should make scrapping the Vagrancy Act

An FOI request was sent by Patrick Greenfield to all police forces across England, Wales and Northern Ireland. Data was received from 32 out of 44 forces in total (73%). The FOI asked a question on the number of arrests the force made under the Vagrancy Act 1824 in the last 5 years. 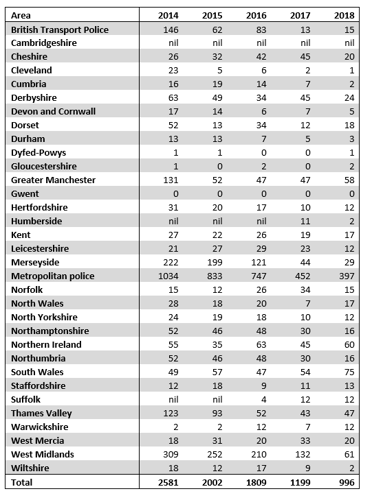