Nearly 160,000 households, estimated at just under a quarter of a million people (see notes), are experiencing the worst forms of homelessness across Britain, with rough sleeping forecast to rise by 76 per cent in the next decade unless the governments in Westminster, Scotland and Wales take long-term action to tackle it.

This is according to new expert analysis conducted for Crisis by Heriot-Watt University providing the most complete picture to-date of the worst forms of homelessness, including rough sleeping and sofa surfing, as well as 25-year forecasts for each category across England, Wales and Scotland.

Launched as part of Crisis’s 50th anniversary year and drawing on the most up-to-date sources available, the report estimates that at any one time in 2016 across Britain [breakdown also available by nation]:

Drawing on detailed economic modelling, the report warns that if current policies continue unchanged, the most acute forms of homelessness are likely to keep rising, with overall numbers estimated to increase by more than a quarter in the coming decade (26.5 per cent) and households in unsuitable temporary accommodation set to nearly double (93 per cent) [see appendix for graph].

In response to the report’s findings, Crisis is calling on the public to join its Everybody In campaign – a national movement for permanent change aimed at ending the worst forms of homelessness once and for all.

Jon Sparkes, Chief Executive of Crisis, said: “This year Crisis marks its 50th anniversary, but that’s little cause for celebration. We still exist because homelessness still exists, and today’s report makes it only too clear that unless we take action as a society, the problem is only going to get worse with every year that passes. That means more people sleeping on our streets, in doorways or bus shelters, on the sofas of friends or family, or getting by in hostels and B&Bs. In order to tackle this, we need to first understand the scale of the problem.

“Regardless of what happens in people’s lives, whatever difficulties they face or choices they make, no one should ever have to face homelessness. With the right support at the right time, it doesn’t need to be inevitable. There are solutions, and we’re determined to find them and make them a reality.

“Yet we can’t do this alone, which is why we’re calling on the public to back our Everybody In campaign and help us build a movement for change. Together we can find the answers, and make sure those in power listen to them.”

"We warmly welcome the Government's pledge to tackle rough sleeping and other forms of homelessness. Now's the time for action and long term planning to end homelessness for good."

Everybody In aims to bring people together to change opinions, raise awareness and ultimately end homelessness for good, and includes a library of first-hand accounts showing the reality of homelessness in Britain.

Alongside this, Crisis will be working towards a national plan to end the worst forms of homelessness once and for all, bringing together everything needed to make this happen, including consultations in all three nations and a large scale programme of research.

Today’s report is the first of two parts, with the second - due for publication in the Autumn - to examine ‘wider homelessness’, including people at risk of homelessness or those who have already experienced it, such as households that have been served an eviction notice and those in other forms of temporary accommodation. 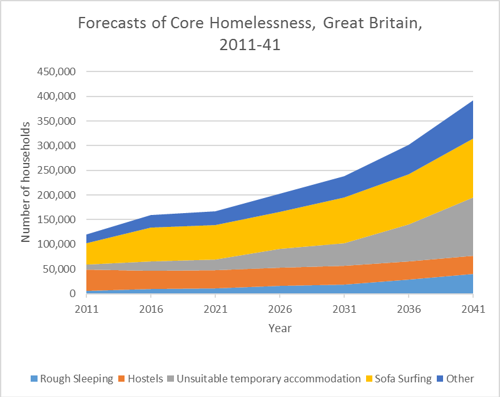 Crisis is the national charity for homeless people.

We are determined to end homelessness. We do it person by person and by influencing policies to ensure everyone has a place to call home.

Crisis offers ground breaking housing, health, education and employment services.  We work with thousands of homeless people across the UK every year.

We are also determined campaigners. We draw on our research, partnerships and years of experience of working directly with homeless people to deliver change and a vision to end homelessness for good.