Why I Joined the Crisis Fringe at the Conservative Party Conference

My name is Debbie. I’m a Member Ambassador for Crisis Skylight Croydon. The role involves meeting people who may not know a lot about Crisis and telling them about it by using my lived experience as a member.

I had mental health problems and it was difficult for me to live with my family as they didn’t understand about mental health. I moved from my parents' house into a hostel. One of the challenges was that I had little knowledge about benefits and no knowledge about what the processes were.

Another challenge was feeling unsafe living in a hostel. I was afraid to come out of my room. There was a man who lived there who was very aggressive and intimidating and used to bring in a lot of his friends who behaved in a similar way. He was often knocking on people’s doors asking for money and trying to get into people’s rooms to steal things.

I’ve moved twice since then into different hostels. Living in a hostel was very isolating. I wanted my own space but being under 35 it was impossible to get my own flat and there was very little private sector housing that I could afford.  Also, I did not feel confident in trying to find and maintain a private house.

At the second hostel that I moved to, they had two-bedroom flats.  I was told I would get two offers of accommodation and that if I didn’t accept one of them, I would make myself intentionally homeless. I asked if I could meet the person that I would be sharing with before accepting, but they said it wasn’t possible. I took the place, as I didn’t know if the next offer would be any better. The person was in hospital when I moved in. When she got back she was very unwell, she was screaming and shouting. She kept saying that I was the devil and banging on my door.

I felt scared being alone in the flat with her. I was especially afraid to go in the kitchen as she was often in there, sometimes shouting and waving a knife around. This went on for quite some time. I spoke to the staff, but they said it was down to her mental health team to sort things out and that they would pass on what I had told them to her care coordinator.

I went to Crisis' fringe at the Conservative Party Conference to speak to the delegates about my experiences and to support the Crisis #CovertheCost campaign for housing benefit to meet the true cost of renting. I wanted to put my views across in a way that would make an impact, and it was great to have the opportunity to be part of a panel alongside people of influence in the Conservative Party. 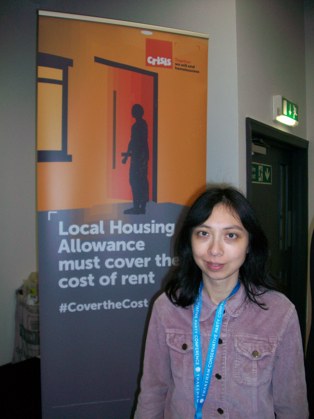 It was good that the audience were involved with the discussions and asked many questions. However, one member of the audience felt that people on benefits were mis-spending their money. This is not the case for many people like myself who want to live a full and productive life but cannot get opportunities, flexibility to accommodate fluctuating mental and physical health issues or are working and their wages do not cover the high cost of rent. What good would a big T.V be if you had no electricity? It is so sad that in our country there are people who have to choose between having heating or some food.

It is a myth that people can just move to a different part of the UK to find accommodation. As the map that the Chief Executive of Crisis Jon Sparkes showed, all across the UK housing benefit does not cover the rent.

It stands to reason that, when people are in the situation where they can't find anywhere affordable to rent, they are more likely to get into trouble with rent arrears and that can be a slippery slope to becoming homeless.

Homelessness is not a choice, it is a horrible situation to be in and nobody should have to experience it.

·         I want to be heard when I tell people that homelessness can happen to anyone.

That's why I'm backing this campaign and why I think the Conservative Party should too.

Find out about what you can do to support the Cover the Cost campaign here: www.crisis.org.uk/coverthecost