The Private Rented Sector Access Development Programme began in 2010 and was devised by Crisis, working with and funded by the DCLG. The programme funded a total of 153 schemes across England.

The PRS Access Development Programme has created a critical mass of evidence that has underlined three key things.

First, the PRS can operate as an effective homelessness measure for people at all stages of housing difficulty: as a preventive measure, to facilitate move-on and as an option for complex-needs clients. A number of schemes were successful in achieving good results in housing young people and ex-offenders – both groups that have been regarded as presenting particular challenges to landlord recruitment. Schemes are creating innovative solutions to make shared housing work for young people; and with the right kind of support landlords can be found even for high-risk groups such as ex-offenders. Pre-tenancy training has been demonstrated as being an essential element to tenancy creation.

Second, the PRS can provide sustainable tenancies that are highly likely to continue beyond their first six month period. This is not a short-term option, but can be a longterm solution and provide a solid basis for a tenant’s re-engagement with the labour market.

Third, using the PRS effectively is not a zero-cost option. Access schemes do require financial support, and the Programme has demonstrated that the current funding climate presents challenges for many schemes. However, the local authority is not the only funding body available. Schemes have pursued funding through the Probation Service and through Primary Care Trusts, and through other charities. The ‘Making it Count’ tool demonstrates that investment in access outcomes clearly constitutes a cost-effective approach. Furthermore, funding the third sector to deliver access work is particularly beneficial. Landlords clearly engage more readily with third sector agencies and are less likely to require monetary incentive in those circumstances. Monitoring outcomes rather than service delivery means that a lower level of bureaucracy is required. Furthermore, Crisis has in place an effective network to circulate and promote best practice and service innovation.

The Programme has delivered over 8,000 tenancies at the cost to taxpayer of around £1,000 a tenancy. This investment has not contributed to ‘incentive inflation’ but has,
rather, created circumstances in which landlords are more likely to settle for longer term tenancies with rents at local housing allowance rates. In doing so, the Programme has helped to stabilise the lower end of the PRS and create a framework in which it can work more effectively for single homeless households. 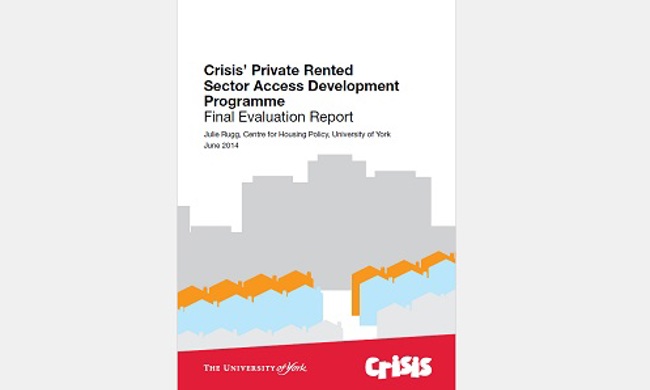 Final evaluation of the Private Rented Sector Access Development Programme which began in 2010. The programme was devised by Crisis, working with and funded by the DCLG.