The APPG for Ending Homelessness' campaign for a safe home for anyone fleeing domestic abuse.

Since 2018, the APPG for Ending Homelessness has campaigned to ensure people fleeing domestic abuse have a safe home.

The APPG has been working with Crisis and other partners across the homelessness and domestic abuse sectors to ensure that survivors can access a safe home through their council.

In May 2020 the Government announced that it would amend the Domestic Abuse Bill so that anyone made homeless as a result of domestic abuse will have a legal right to housing, marking an incredible win for the APPG.

This is a landmark moment for survivors of domestic abuse. This change will prevent thousands from becoming homeless and undoubtedly save lives.

In April 2021, the Domestic Abuse Bill passed both Houses of Parliament and was signed into law.

We will continue to campaign on this issue to ensure that survivors of domestic abuse are not forced to face homelessness. 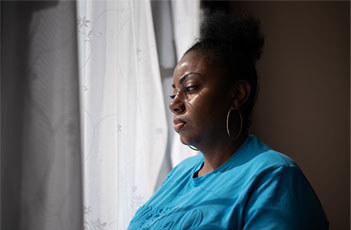 'My husband and I split up in 2014 after he was arrested for beating me up badly. I was only working part time and had nowhere to stay at the time other than sofa surfing with a friend or sometimes with my mum.

I’m seeing friends in similar abusive relationships, and I’m scared for them.'

Do you have experience of this issue?