This study investigates homeless mortality in England for the period 2001-2009. It draws on a number of different datasets to identify the death certificates of homeless people and from this ascertains ages and causes of death.

• The average age of death of a homeless person is 47 years old and even lower for homeless women at just 43, compared to 77 for the general population.
• Drug and alcohol abuse are particularly common causes of death amongst the homeless population, accounting for just over a third of all deaths.
• Homeless people are over nine times more likely to commit suicide than the
• general population
• Deaths as a result of traffic accidents are three times as likely, infections twice as likely and falls over three times as likely.
• Being homeless is incredibly difficult both physically and mentally and has significant impacts on people’s health and well-being. Ultimately, homelessness kills.

Thomas, B. (2011) Homelessness: A silent killer - A research briefing on mortality amongst homeless people. London: Crisis. 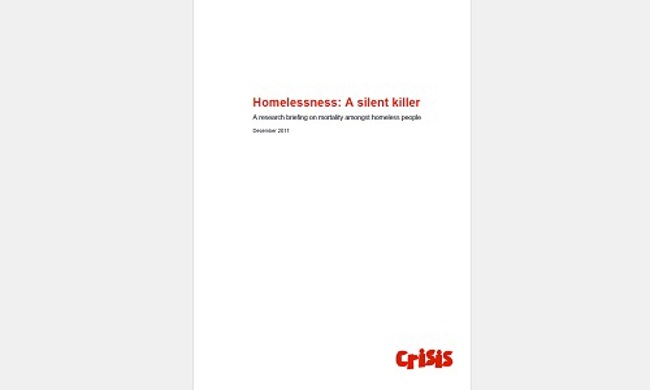 A research briefing on mortality amongst homeless people