This report highlights the experience of people in the seven Scottish council areas with the highest use of UTA (Edinburgh, East Lothian, Glasgow, Midlothian, East Dunbartonshire, Aberdeenshire and Highland). Based on a survey of 109 people, the majority (74) had experience of UTA, primarily B&B or hotels.

The report looks in detail at how long people spend in UTA in each council area and the reasons why people move on from UTA before permanent housing is found. It also details the difficult conditions people experience in UTA and how prolonged stays in it make them feel. Furthermore, it shows how these how experiences can make it harder for them to end their homelessness.

Planning for the future

Sanders, B. with Reid, B. (2018) ‘I won’t last long in here’: Experiences of unsuitable temporary accommodation in Scotland. London: Crisis. 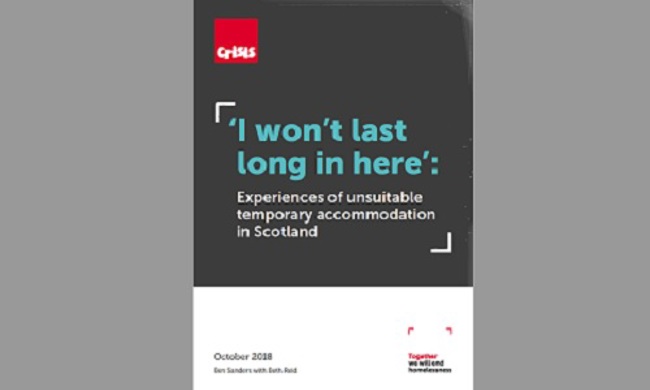 'I won't last long in here': Experiences of unsuitable temporary accommodation in Scotland (2018)