Carol's story. 'Suddenly I had to rethink my life.'

I was born in the Seychelles in 1985 and moved to Aberdeen when I was 18 months old. My mum is from the Seychelles and my Dad is Scottish from Aberdeen. We lived in Aberdeenshire, while my dad was in the military and was posted to Saudi Arabia, then my mother and I moved to Saudi Arabia with my dad when I was 5 years old. When I reached 10, my parents sent me to boarding school in Scotland. While at school, I did well at athletics and I was in the under-18 Scottish athletics team. I had also signed up for military training. However, I fell off a horse when I was 17 and this was the end of that career choice and the beginning of my health problems.

When I healed my nerves grew around my sciatic nerve. It meant I could walk but couldn’t use my right leg properly. Suddenly I had to rethink my life. My plans and dreams of doing athletics and joining the military came to an end.

I came to Edinburgh in 2003 and went to Queen Margaret’s University and studied Business. After I graduated I worked in customer service, but three years ago my health further started to deteriorate and I had to take redundancy from my job with Scottish Widows. I already had Sciatica and subsequently developed osteoarthritis and type 2 diabetes 5 years ago, recently I was diagnosed with non-alcohol related Fibrosis of the liver and Fatty Liver disease.

Then in August of 2018 my landlady from my old flat sold it and I became homeless. Since I was no longer working and was on benefits, I couldn’t find anywhere to live. Landlords wouldn’t take me despite the fact that I had always paid my bills and rent on time. I had to put everything in council storage and stayed in my friend’s spare room in his flat.

My health continued to deteriorate. On bad days I could only walk to bed and back because of my spine and arthritis. The council gave me priority need but still said it would take about nine months to a year before I got my own place. I started bidding on properties though, and was put in touch with Crisis. Crisis started looking for places for me to rent. They helped me work out the money at my disposal, and to apply for things I was entitled to. They gave me lots of advice on looking for places and were always very friendly and helpful.

When we came into lockdown I was still staying in my friend’s spare room in his tiny flat waiting to be housed by the council. It was meant to be a stop gap but it was now eight months later. We were starting to really get on each other’s nerves as it was such a tiny space and we kept very different routines. Being holed up together constantly really highlighted this. I was worried that he could kick me out at any moment, and I felt very insecure living there. The flat was up three flights of stairs which made it very difficult for me to go out with my health conditions. Furthermore I was worried that if I did go somewhere I ran the risk of infecting him which could have been fatal as he suffered from a severe lung condition.

I felt abandoned by the council. I couldn’t get hold of anyone and all the systems had shut down. I couldn’t bid on any properties although I had been given gold star priority. I began to feel very anxious and depressed, not knowing how long this situation would go on for.

After the lockdown Crisis got in touch to say the allowances had changed so that I could afford a bigger place. Then Crisis found this place for me. They spoke to the landlord and managed to get the rent reduced from £800 to £725. I viewed the place by photographs and had a walk through on Zoopla. I did reference checks and credit check which I passed. Then they called me to say I was accepted. Crisis secured the bond with the letting agency. Without this I would not have been able to move in. Without Crisis I would not have been able to secure a home as the council’s bidding system has closed down, leaving more people stuck. Crisis was looking everywhere for properties for me.

Crisis also arranged for a removal company to come and help me move which they paid for. Now I have a lovely two bedroomed ground floor flat with a garden in a quiet area – all neighbours lovely, ten minutes from town on the tram. Every landlord I had applied to previously had turned me down due to being on benefits. Crisis spoke to the landlord directly and vouched for me and told them I had been vetted by them and negotiated the reduction in rent. They basically argued my case. Without them I would not have known this place was coming up. Having someone reputable as Crisis backing me up made a total difference. It gave me clout.

'I don’t have any family support so it’s very lonely at the moment. If I didn't have Crisis' help... 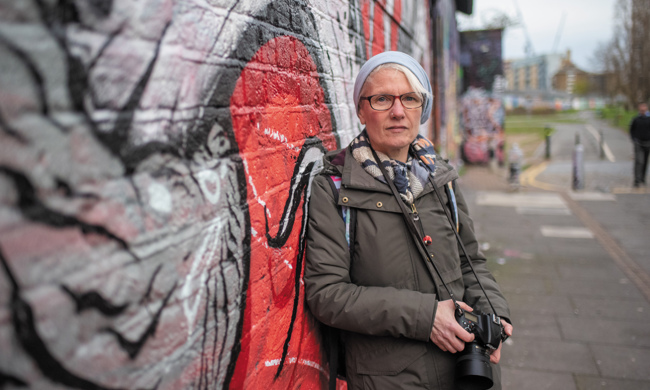 'I have been sofa surfing with friends for four months while bidding on council properties. But s...